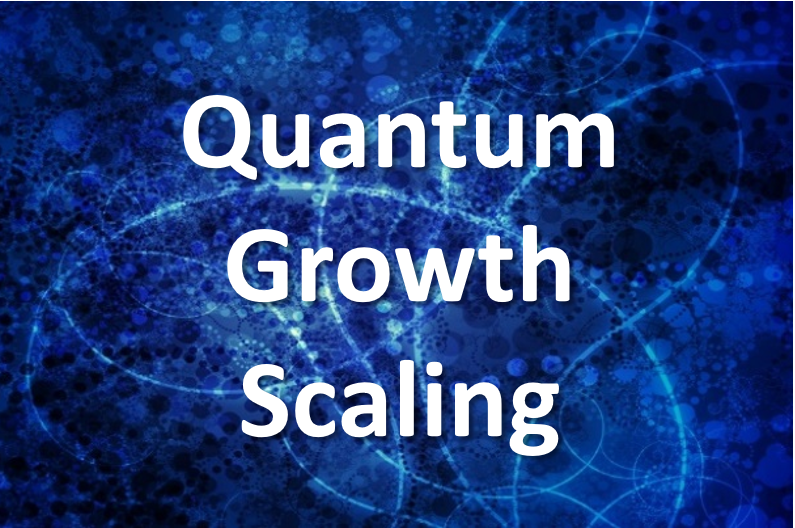 The Quantum Growth SCALE consulting service is designed for small and medium-sized business owners to create a quantum leap with their enterprise by acquiring and integrating tried-and-tested strategies, methods and tools needed to expand their business and scale with velocity. The following materials outline the key components of the service. To download our Quantum Scale Whitepaper, click here.

Fledgling businesses and first-round funded start-ups must rapidly scale-up by building a superlative leadership culture, implementing solid accountability and performance protocols and seizing the competitive advantage in the marketplace.  While these are the obvious challenges, it is how they are dealt with that makes or breaks a growing enterprise.

First, there are four factors that must be navigated with precision to ensure rapid, responsible and profitable scaling for any enterprise. They are, Superlative Leadership Culture, Accountability Performance Benchmarking, Dynamic Management Engagement, and Compelling Marketing Presence.  Our seasoned consulting team will equip you with the tools, skills and experience needed to navigate these four factors and scale-up your enterprise with confidence.

Second, the actual steps for successful scaling must be implemented in a timely and effective manner.  Diamius utilizes what is called The Quantum Growth SCALE Model which is composed of eight vital aspects - SupraVision, Go To Market Planning, Go To Market Execution, and the five key expansion areas of Strategy, Capitalization, Accountability, Leadership and Engagement.  SupraVision is primary to the model because without superlative leadership even the best positioned and best funded company will fail. The following diagram outlines all the key aspects of the “SCALE” process: 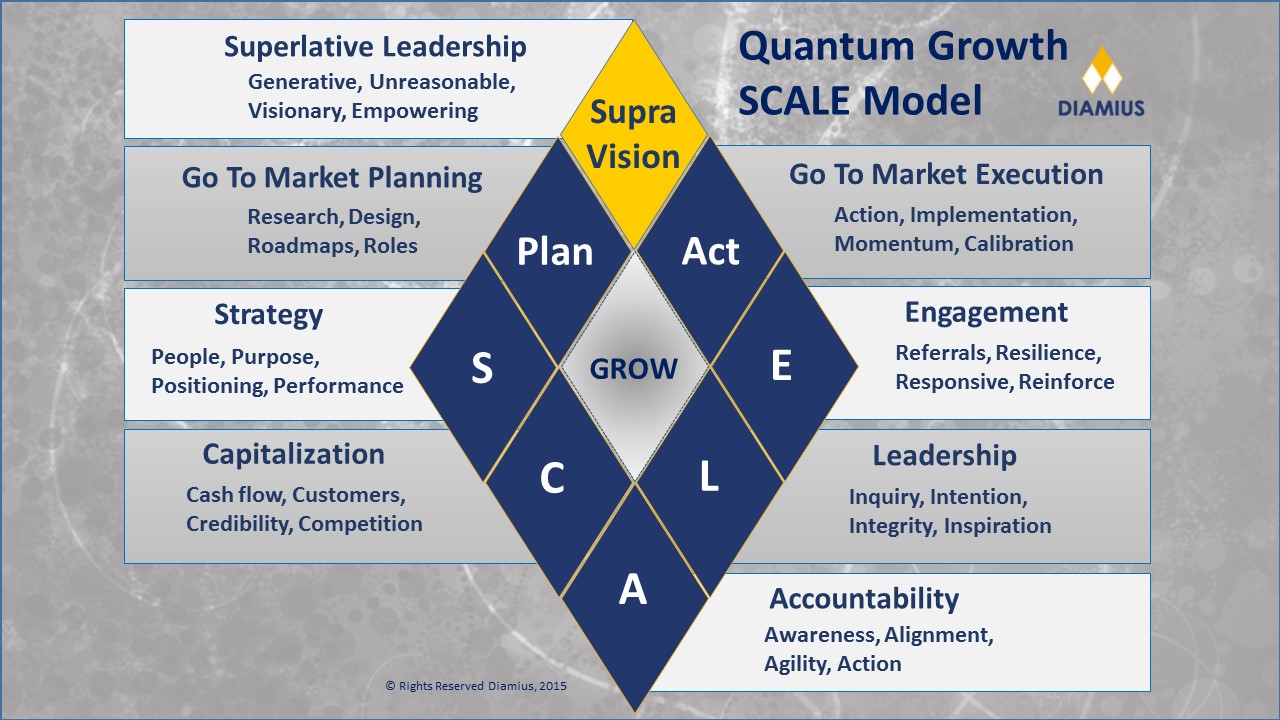 Here at Diamius Multinational we believe in an integrated approach to development. The five facets of personal and professional development we focus on are, Love, Aliveness, Abundance, Belonging and Joy. These five can be shaped into a powerful convergence or "point of clarity" much like the facets of a diamond come together at the apex of its brilliance. As we "polish" each facet it enhances the brilliance of the whole of who we are. The bar graph to the left shows the degree of engagement and results you can expect by participating in this particular Diamius resource or program.

Your co-mentor team, Val Jon Farris and Elizabeth (Eli) Davidson are world-class professionals. They are recognized experts in the arenas of both  personal and professional development and work with a wide range of entrepreneurs and business owners from around the world. As an example they are currently official mentors and advisers for Richard Branson’s XTC Academy, which empowers visionary entrepreneurs the world over to scale-up their enterprises and operate on a global level.

Val Jon is a well-respected corporate leadership curriculum designer and has mentored and trained thousands of Fortune 50 executives, country leaders and professionals over a thirty-year span. He is also a well-respected self-development workshop leader, published author and featured columnist for The Huffington Post. Companies such as Oracle and HCI sponsor Val Jon to lead virtual leadership programs for L&D,and OD and HR Executives from a wide range of companies from around the world.

Elizabeth is a rapid business growth expert and has mentored professionals from around the world.  She is on Sir Richard Branson’s Advisory Counsel for the XTC Academy, which empowers visionary entrepreneurs the world over. Her renowned “turnaround techniques” have been featured on The Today Show, Dr. Phil’s Decision House, SELF Magazine, New York Times, the Huffington Post and CNN in 134 Nations. Her clients include Women Inc. 500 CEOs, Emmy, Grammy, Oscar winners as well as many A list celebrities. Joan and Melissa Rivers filmed breakthroughs with Elizabeth on their show, Joan Knows Best.

"“You’ve been a great role model in inspiring me to make a bigger move.  This business scaling mentoring has been invaluable.  You condensed time and took me to the next level.  I am so grateful.”

“I met Eli during a very low point in my life and within two weeks I began my transformation.  Now I am a different person.  I’m in a great place.  I’ve learned skills that will be with me forever.  Open your mind and let Eli help you live your dream.  Trust me her authentic success coaching really works!”

"The Diamius SCALE consulting sessions have been priceless. They provided clear concise steps with specific well-defined guidance. The facilitator’s involvement during the Q & A sessions inspired the process to move forward at a rapid pace, for this alone it was a Godsend."

“Eli means business.  The innovative system she has developed works on many levels.  Her ‘product’ is explosive and dangerous so be prepared to expand beyond your wildest expectations.”

“If you’re looking for tangible results in your career, business or personal life I could not more highly recommend them.  I’ve made a quantum leap in my career.  I set very specific, and at that time what I felt very ambitious goals.   I was mentored every step of the way and am elated to say that each and every goal was met.”

“As a direct result I was able to complete important project work in a highly satisfactory manner.  The program mentors are professionals of high character and in particular, very skilled at working with people.  I recommend them highly.”